Recycle artist Thomas Dambo shows how one man’s trash is another’s treasure – one giant troll at a time.

In the courtyard of his studio outside Copenhagen, Thomas Dambo is trying to decide how the trolls will deal with the havoc humanity is wreaking on the earth.

“Every 211 years, the trolls have a big meeting where they talk about the state of mankind because they know that many times throughout history, people have endangered the life of the animals and the planet,”Dambo says. “Now mankind is out of line again. But what should they do?”

The troll meeting, called the Troldefolkefest, is the subject of an upcoming installation by Dambo, an artist who makes giant sculptures out of scrap materials. It’s a way, he says, to show both the scope of the world’s trash problem and its possibilities. 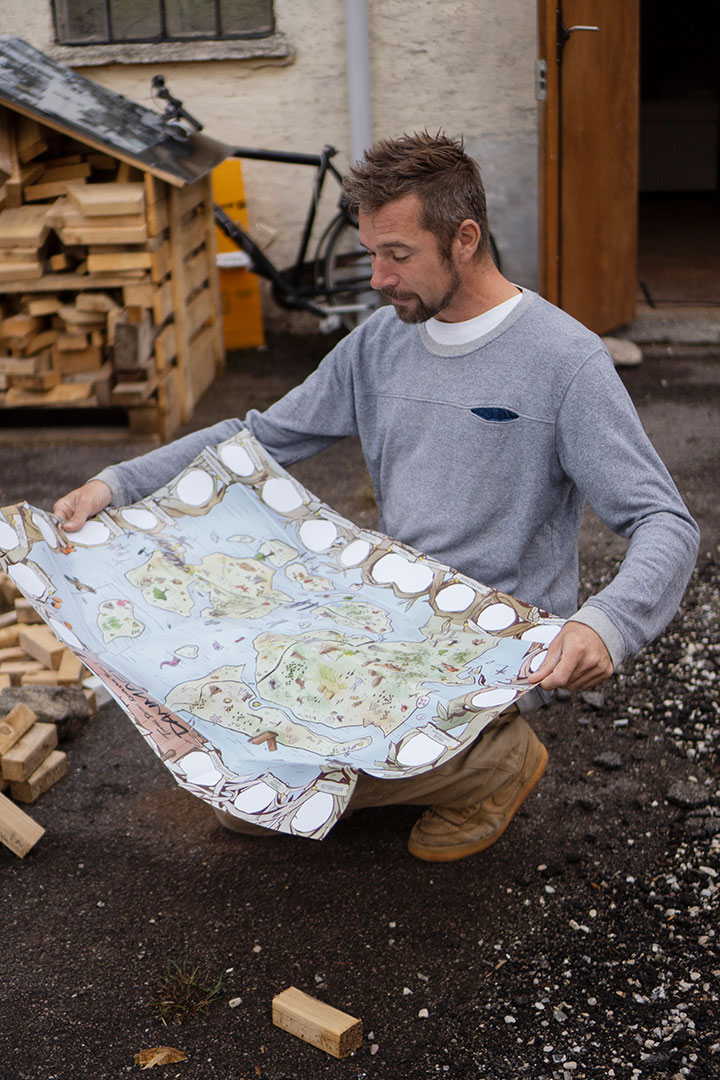 Recycle activist Thomas Dambo plots the creation of another troll.

Making something out of nothing

Dambo calls himself a recycle activist, and his ability to find new uses for discarded or rejected materials isn’t only visible in his art. The furniture and fixtures in his home and office space also are repurposed from leftover pieces of wood and other spare parts.

The decision to work exclusively in scrap materials is a reflection of both Dambo’s values and his personality.

“My parents, they brought me up to be a good citizen of the world and try and think about not only myself and my dreams, but also the greater perspective of the world and that you should try and be resourceful,” Dambo says. But then, he adds, “I was also very impatient.” 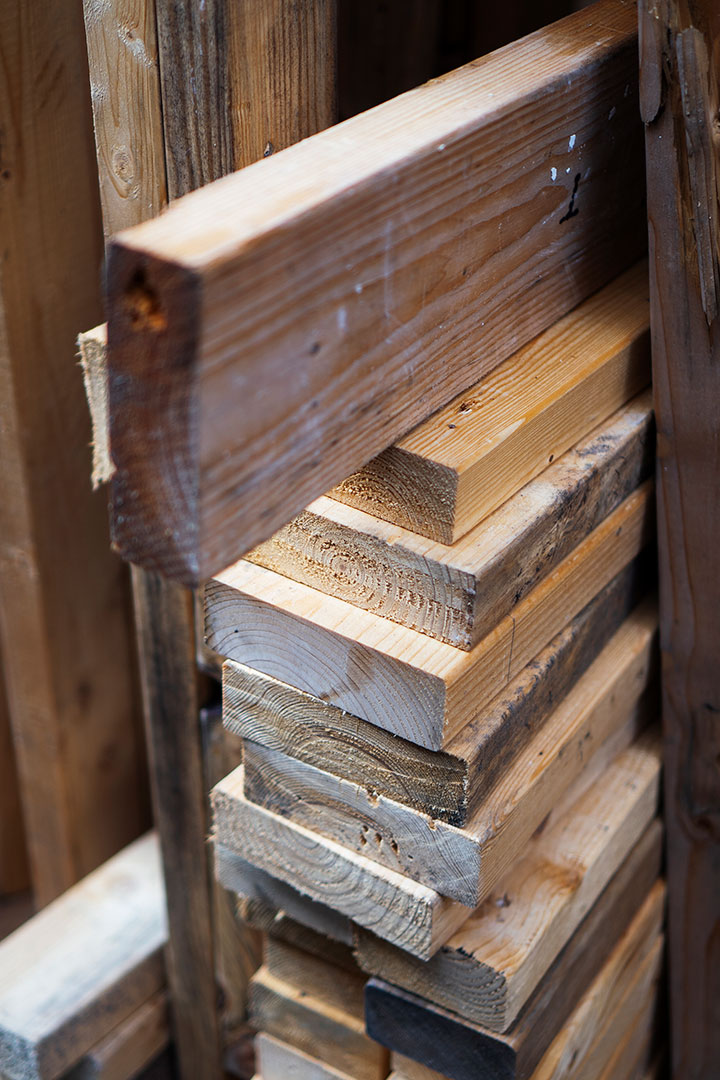 Dambo says that as a child, the very worst thing for him was not being able to immediately act on his ideas. If he wanted to build a fortress for his action figures, for example, he wanted to do it instantly rather than wait for his mother to take him to the store to buy materials, so he scavenged around for whatever materials were available.

“Later, when I had the money to actually buy materials, I learned that it didn’t make for better design,” he says. “And I just realised that there are a million ways of designing anything. Why is it that you need to go and buy something specific to do it?” 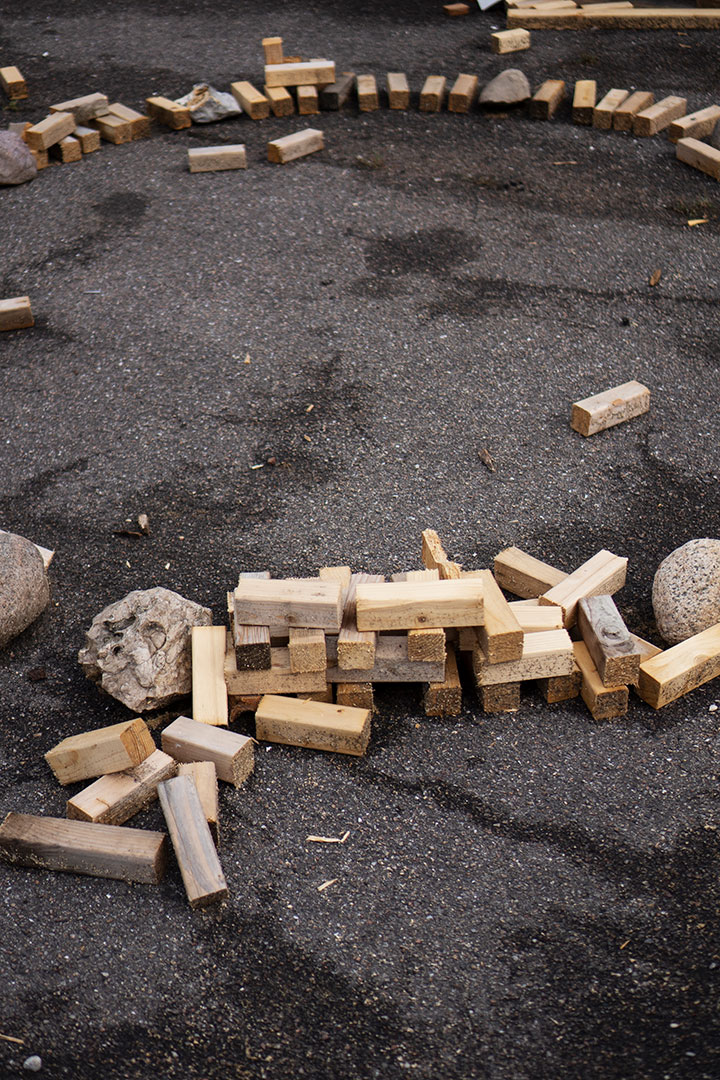 Another masterpiece begins to take shape.

Finding the best material for the job

Dambo generally decides what he wants to create and then goes out to find the materials to do it, but sometimes it works the other way around. As his fame has increased, scrap materials tend to find their way to him. He acquired a bunch of advertising panels that used to hang on the walls of the Copenhagen metro.

He thinks they would make an interesting pattern for the siding on his new studio space. His trolls are made from leftover shipping pallets or pieces of timber that can’t be sold because they are damaged or imperfect. While he will work with any material, Dambo says he prefers wood.

“Wood is the best material we have to build things from in the world,” he says. “It just comes right out of the ground. It doesn’t pollute anything, it’s not toxic to work with, and when it decays it provides more nutrients. It’s an amazing material like that.” 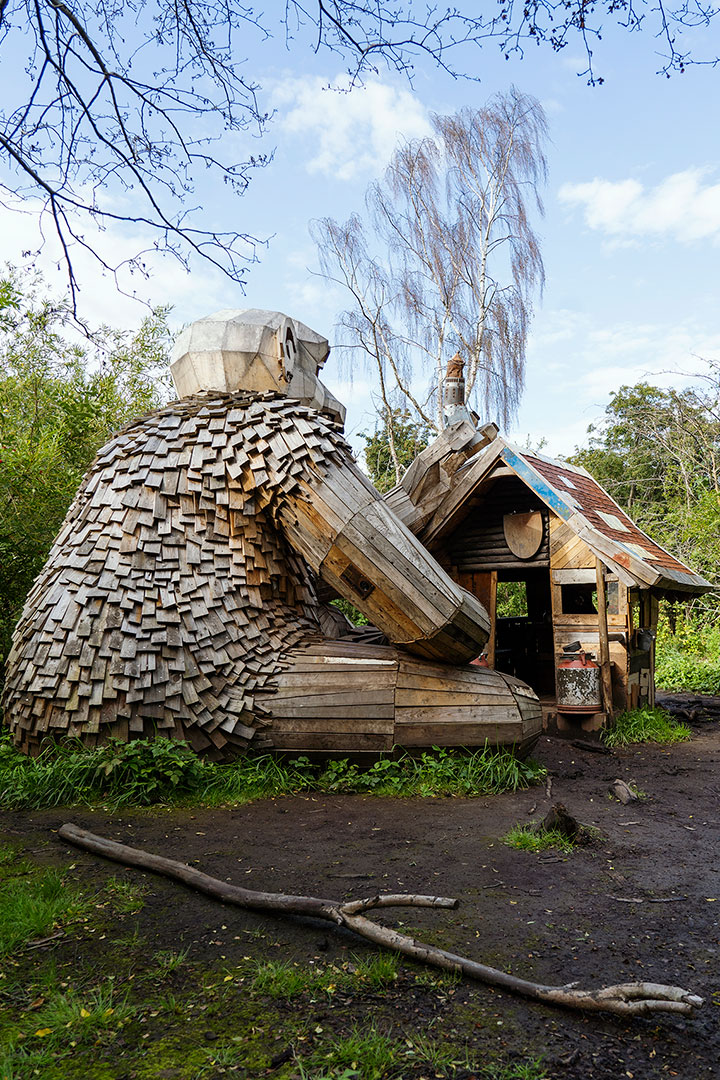 So far, Dambo has created 81 trolls across seven countries.

Dambo didn’t set out to create a community of trolls to help show humans the way to a more sustainable future, but from the beginning, the project has emphasised how trash can be used to create something exciting.

“The first couple of ones that I did, I didn’t really call them trolls at that point,” Dambo says. “For me, they were just these big, recycled beings that had their own stories and their own life, but then people wanted to call them something and that ended up being trolls.”

The trolls, which are constructed from small pieces of wood and only need simple tools to put together, allows him to engage as many people as possible in the creation process. Each project involves dozens of volunteers who help assemble the troll. 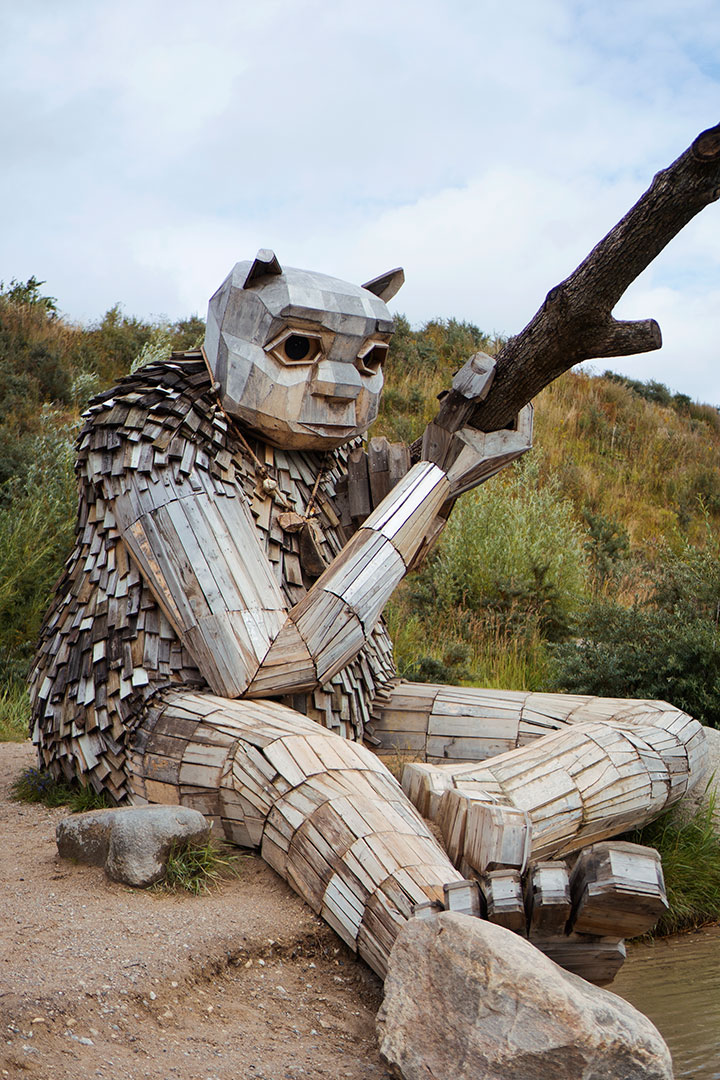 Every troll is different and has its own personality.

Choosing trolls as a subject also allows Dambo to maximise the materials he has to work with.

“I’m not building Justin Bieber every day, so people can’t come and say, ‘It doesn’t look like him.’ It’s a troll. I decide what it looks like. I can give it five arms if I want to do that, or one eye or whatever. If the one arm is longer than the other one because I was able to find a long enough construction beam to put inside it, that doesn’t matter,” he says.

So far, Dambo has created 81 trolls in seven countries and eight US states, locating them mostly in out-of-the-way places that require a little effort to find. He’s currently working on number 82. He wants to use the mas away to get people to experience nature in a different way.

“The way I play with the relationship between nature and art is that I make people go searching for my sculptures. It becomes the reason to venture into nature. Maybe people wouldn’t go all the way to that little weird forest in the countryside if there was no sculpture there. But when they come there, they have to open their senses and that’s when they see all the other things that nature has to offer,” Dambo says. 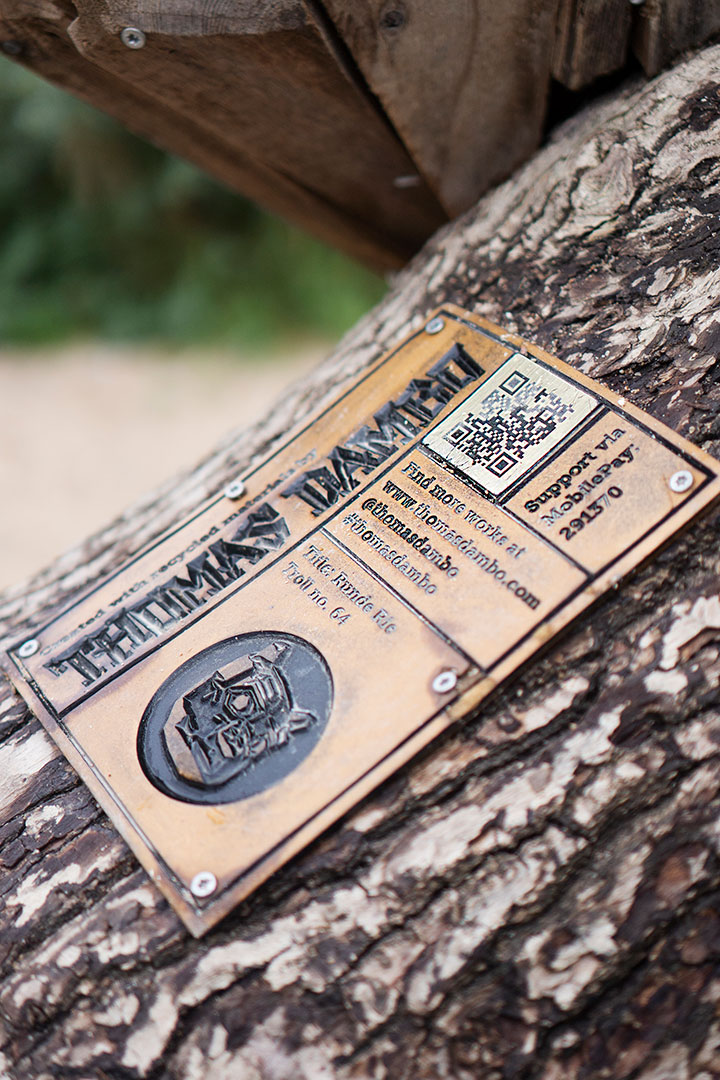 The meaning of the trolls stretches far beyond art.

The material of the future

The trolls are social media stars, and it’s not by accident. Dambo wrote his undergraduate thesis on viral marketing campaigns, so he understands the power that social media can have, and he knows how to use it well. His art is particularly suited to the medium, and that helps him spread his brand and his message. Every selfie is a way to show how trash can take on a life of its own.

“I think that most people understand what my art is about because you can see what it’s made of,” Dambo says. “People can just see that you can create something out of waste. The world doesn’t need to be suffocated in our trash. Trash can also be what we build the future out of.” 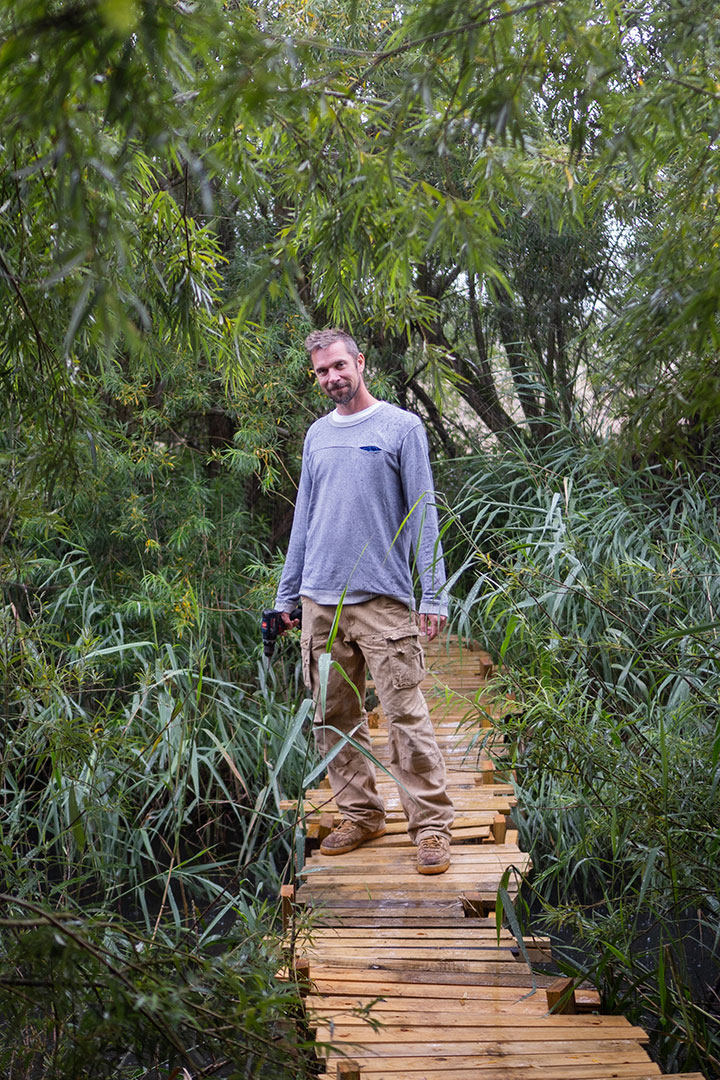 Dambo has harnessed the power of social media to make his creations into viral stars.