The science behind a clear and present danger

As alarm bells ring over the state of the environment, will the latest Intergovernmental Panel on Climate Change report finally force the world leaders to focus at COP26 to meet this unprecedented challenge?

In 1990, the first Intergovernmental Panel on Climate Change (IPCC) Assessment Report concluded that human-caused climate change would soon become evident but could not yet confirm that it was happening. The latest findings unequivocally state that human influence has warmed the atmosphere, land and sea, and that the changes across the climate system are unprecedented.

With this and many other warnings ringing in their ears, world leaders are heading to Glasgow, Scotland for COP26. This UN summit on climate change has been described as ‘seminal’ and ‘humanity’s last chance’ because without immediate action, it’s going to get much worse.

A Code Red for humanity

“Every COP over the last decade has been described as the ‘one that's going to change the world’. Unfortunately, we’ve heard a lot of talk about targets, but not a huge amount of action. I’m hoping for the best but won’t be surprised if we don’t make that much progress,” admits Paula Owen, CEO and founder of the sustainability agency Green Gumption.

Despite the general pessimism, progress and action are critical, with the latest IPCC report being described as a “code red” for humanity by UN Secretary-General António Guterres. “It’s a good description of the situation, but it would have been better said a decade ago,” opines global climatological expert Jim NR Dale.

“To a certain degree, we’ve all been a little ignorant, naïve and even greedy, but now some fossil fuel companies and others are trying to turn the ship around—the Titanic has hit the iceberg and we are sinking, they now realise that. However, it's difficult when the world is dependent upon oil and gas,” states Dale.

Professor Katharine Hayhoe, Chief Scientist for The Nature Conservancy, agrees, saying it is clear we’re all in the same boat: “We’re facing a challenge that will affect every one of us within our lifetimes, not to mention future generations and most other life on earth. The need to act collectively and decisively has never been more urgent.”

Although a lot of the damage is irreparable and irreversible, at least in terms of human time, all is not lost. Reducing the flow of heat-trapping Greenhouse Gas (GHG) into the atmosphere, by either reducing the sources of emission or increasing the sinks that accumulate and store these gases, such as oceans and forests, could still make the planet habitable in the future.

Mitigation efforts will require an unprecedented, sustained, global effort involving all aspects of human activity. At present, global surface temperature, which is fundamental to characterising and understanding global climate change, will continue to increase until at least the middle of the century under all the GHG emission scenarios that have been considered.

This temperature rise has accelerated the speed at which the polar icecaps are melting, causing them to melt six times faster than the rate of just 20 years ago. The massive icesheets, present in the world’s seas and on every continent except Australia, have also started to melt at an alarming rate. All this melting ice is leading to rising sea levels that will eventually flood coastal and low-lying land.

Agricultural and ecological droughts in some regions, especially the already arid or semi-arid regions with large population concentrations, will threaten the food security, livelihoods and social cohesion of hundreds of millions of people.

The IPCC Assessment Report states that climate change will cause extreme and unprecedented events when they occur, at a larger magnitude, greater frequency and in places where it hasn’t happened before, as well as in previously unseen combinations. 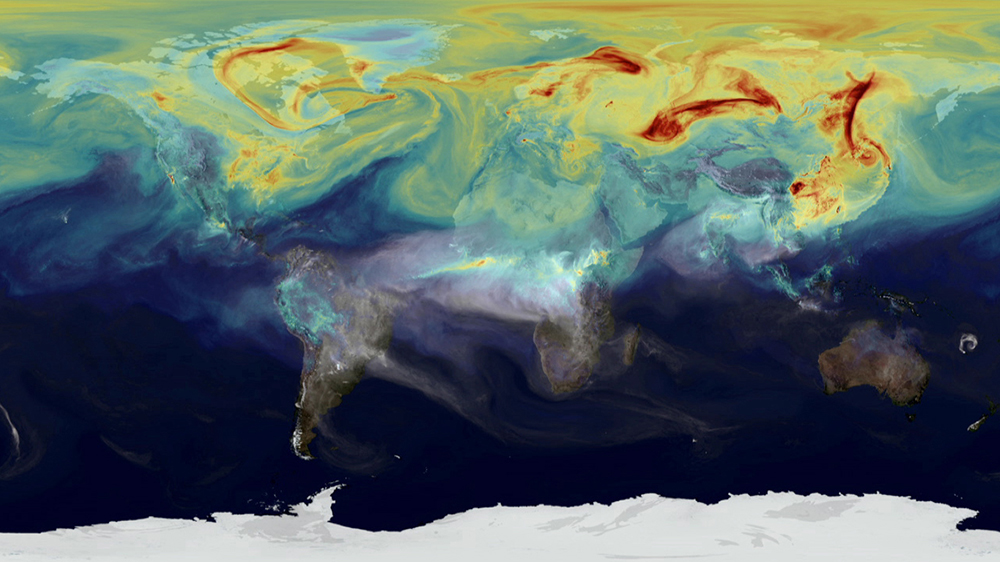 Global surface temperature will continue to increase until at least 2050 under all the greenhouse gas emission scenarios that have been considered. Photo: NASA/UPM

Taking a turn towards sustainability

“Where can we start? Almost everywhere: accelerating the transition to clean energy; reforming our most environmentally damaging activities; and recalibrating financial flows to accelerate the economic transition,” lists Hayhoe.

Even though global energy demand is estimated to grow by 50% from current levels by 2035, and worldwide car sales are expected to grow to over 71 million units in 2021, all is not lost.

The move towards stricter emission standards and fuel efficiency for the automobile industry promises to reduce GHG emissions caused by the sector. Global sales of electric vehicles, which cause less pollution than their fossil fuel-burning counterparts, grew in 2020 by 41% compared to 2019’s figures and their market share increased to a record 4.6%.

Advanced economies and many developing economies have made major commitments towards increasing the proportion of renewable energy in their nations’ energy production capacity. Popular support and increasing political are only likely to accelerate this trend.

Education of the population is a crucial part of the solution, as well as actions and not just lip service, lists Dale: “We’ve got too many greenwashing politicians who provide the right soundbites but are very bad at putting the words into action. It’s also important to ensure robust severe weather warnings, otherwise these extreme events will kill people.”

On the business front, there have been many positive signs from corporations that they are stepping up to do their part to become sustainable and mitigate climate change. UPM, which was one of the first global forest industry companies to commit to the UN’s Business Ambition for 1.5°C, promotes sustainability practices throughout its whole value chain, says Stefan Sundman, Vice President, Public Affairs, UPM.

He adds that UPM is committed to climate positive forestry: “This means that within our forests, we grow more trees than we need to harvest to ensure that they absorb more carbon. Within our operations, we are committed to decreasing our own fossil emissions by 65% over the next 10 years and for consumers we offer an ever-widening range of renewable products to replace fossil consumption.”

Sundman notes that sustainable forest management also has a great role in the mitigation of climate change because it can be used to preserve biodiversity and secure the economic and social benefits in rural areas of the value chain, meaning forests can provide ways to replace fossil fuel consumption.

With the science behind climate change having never been clearer, there is still hope, believes Owen, a climate scientist: “We still have time, but we haven't time to waste. If we cap the immoral subsidies that go to fossil fuel industries and channel them into clean technologies and energy, then there is a chance.”

She concludes by encouraging everybody to act, no matter how trivial you think your contribution is. “If everybody does a small thing, then that amounts to a big thing. No action is too small to say it’s not worth doing. Everything is worth doing” and maybe then, we can turn humanity’s ‘Code Red’, green.