Birch water – the elixir of life?

Birch water has become the talk of the town with its restorative properties making it highly sought after by the beauty and healthcare industries. Learn more about its seemingly endless benefits. Photo: Arctic Birch.

Advertised as a super drink, birch water has long been lauded in the Nordic countries as the solution to everything from stomach ailments to eternal youth. Now the rest of the world is starting to catch on to this natural wonder, with nations such as China and Japan swearing by its healing powers.

Birch water is harvested from the sap of the birch tree and while the sap itself may not be magic, there is truth to its health properties.

“It’s low in sucrose, high in minerals and vitamins, and often used to restore energy after workouts,” says Kim Finne, founder of Arctic Birch, which supplies its sap to the largest Finnish skincare brands as well as to the food industry. “Additionally, Finland has some of the cleanest air and groundwater, and that is what the birch consumes.”

Fresh birch water is a clear and odourless, low-calorie liquid with a sweet taste and is often sold bottled, or used in the manufacture of syrups, foods and beverages.

Finnish beauty brands swear by its anti-ageing properties. “Birch sap has a moisturising, brightening and plumping effect, that increases the skin’s radiance and elasticity,” says Ilona Salomäki, co-founder of Finnish skincare brand Pure=Beauty, adding that the sap works well on all skin types but is optimal for ageing skin. “If used twice a day the results are palpable. The condition of the skin improves, and the skin softens.”

With its supply of vitamin C, birch sap is said to speed up cell division dramatically, helping skin renew itself faster.  It also works as an anti-inflammatory, helping reduce redness and irritation.

Birch sap is also a great replacement for water in skincare. “It was important to us that every ingredient that we used in our products was an active ingredient, and water has no effect at all,” says Jenni Tuominen, the founder of luxury skincare line Henua Organics.

“We use raw materials full of vitamins and minerals that have a dramatic effect on the skin, and birch sap has been known to Finns for hundreds of years for its healing properties. It’s even been referred to as the elixir of life.”

While this natural ingredient comes packed with benefits, acquiring it is no easy matter. Birch sap harvesting is a seasonal industry. The sap can only be collected from the time the snow starts to melt to when the tree begins to utilise its water supply for its crown – usually a total of four weeks per year. “The water is pumped into the roots during the winter, and when it is reintroduced into the trunk it brings with it the nutrients it has absorbed from the ground,” explains Finne.

While other countries have developed extensive pipelines to harvest birch sap, Arctic Birch, like most Finnish suppliers, harvests its tree sap manually, only tapping each tree every other year. The areas from where it is harvested are organically certified forests, and the company collaborates with landowners in the region, buying the sap that they, themselves, harvest.

“It gives them added value, while the tree is still growing,” says Finne, who sees no downside to the endeavour. “We have not noticed that the tree somehow suffers from the harvesting of sap, not even after a decade. The tree reacts like a branch has broken off in a storm – it regenerates. And the landowners can still use the tree for its original purpose, whether it is for paper or timber.” 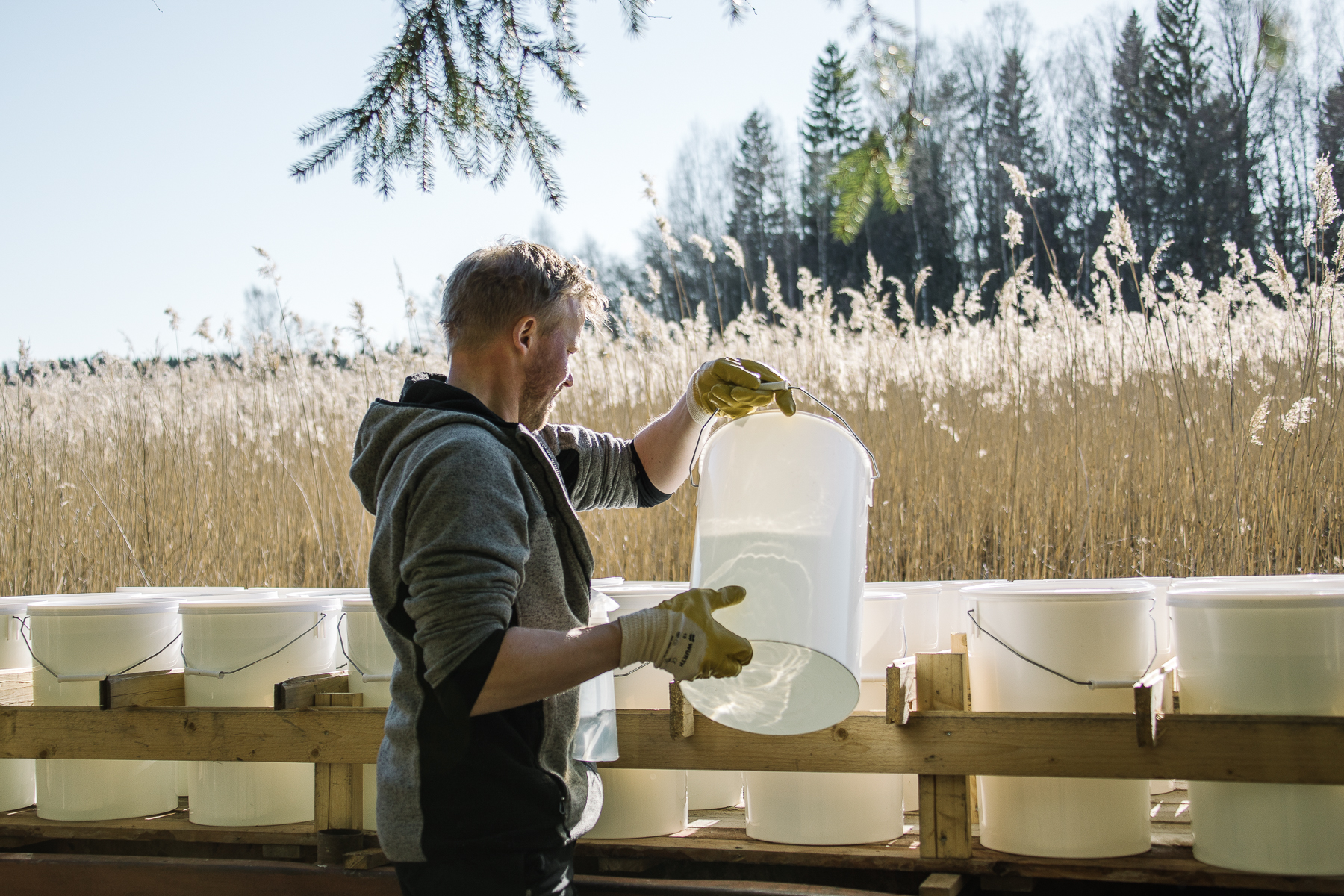 Birch water suppliers have seen their orders more than double in the past few years.
Photo: Arctic Birch.

According to Mikko Kurttila, program director and principal scientist for the Natural Resources Institute in Finland (LUKE), birch sap suppliers in Finland have approximately doubled their orders in the past few years, leading to landowners showing more interest in diversifying the use of their forests. To better match supply and demand, LUKE along with the Finnish Forest Centre have recently created a map identifying areas that have the potential for birch sap harvesting.

“In the past year, we have conducted research to identify how tree characteristics, particularly diameter and forest density affect birch sap quantities. With this knowledge we can inform landowners what they could expect from an annual harvest,” says Kurttila. He is not concerned about a sudden industry boom potentially harming or depleting these natural resources.

“This part of the industry is a drop in the bucket, currently,” he adds. “In fact, I see the development as very positive as it gives additional possibilities to increase and diversify the forest based revenue for landowners.”

All while remaining eco-friendly, of course. The sustainability of their product is something Finne has discovered is vital to his business, with consumers deeply invested in the lifecycle of the resources they use.

“It gets more and more important to the customer,” he says. “We should, in general, be more concerned with utilising the full potential of a plant before it is cut down. It is for the benefit of humankind to use products that are clean and organic. And if you can get it from resources already available to us, you should.”